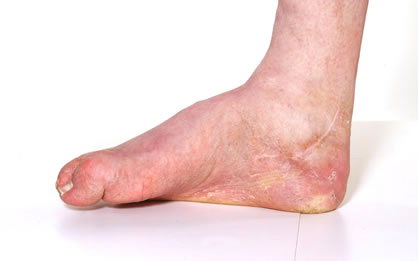 Excessively high arches can be neuromuscular in origin which causes an imbalance between two pairs of muscles or structural in origin following trauma or underlying deformity.

In neuromuscular cases there is often an imbalance between two pairs of muscles. There is often a relative weakness of the peroneus brevis muscle compared with the tibialis posterior. There is also often a relative weakness of the tibialis anterior relative to the peroneus longus. This leads to plantar flexion of the first metatarsal. In order to engage the lateral metatarsal heads with the floor the patient supinates the forefoot and indirectly inverts the heel causing a further exacerbation of the cavovarus deformity. This represents the basis for the “Coleman Block Test”. The patient is asked to place the affected foot on a raised wooden block with the medial aspect of the heel and the great toe unsupported. In a mobile cavo-varus deformity this manoeuvre should cause the heel to move back into valgus.

Patients with cavo-varus deformities usually present with pain under the forefoot especially the first metatarsal head. They also often complain of hind foot pain and ankle instability. The cavo-varus deformity is also associated with clawing of the toes and these can result in painful callosities over the dorsal aspects of the inter phalangeal joints. A careful neurological assessment should be performed on all patients with cavo-varus deformities preferably by a neurologist. The orthopaedic assessment should evaluate the severity of the deformity and whether or not the deformity is fixed.

Initial treatment is usually non-operative consisting of accommodative shoe wear and orthotics. There are a wide range of operative procedures described in the management of a patient with pes cavus. In the mobile foot a dorsiflexion osteotomy of the first metatarsal combined with a lateral heel shift can help improve foot position and pain. This can be combined with soft tissue procedures such as a transfer of the tibialis posterior tendon to the lateral aspect of the foot and a release of the plantar fascia. In the more severe cases procedures such as a wedge tarsectomy can be performed. In the stiff cavo-varus foot a triple fusion can be used to improve the foot position and stability. An alternative option is a gradual correction using an Ilizarov frame.

Flat Feet – Pes Planus
Rheumatoid Foot
COVID Update
We are now able to offer face to face as well as telephone and video link consultations. All patients are provided with face masks on arrival and their temperature is taken. The clinics are being run at reduced capacity to respect social distancing. The hospital staff are being tested regularly. We are also now starting routine as well as urgent surgery. If you have any concerns or want to book an appointment, please ring my secretary on 0113 2185942
X