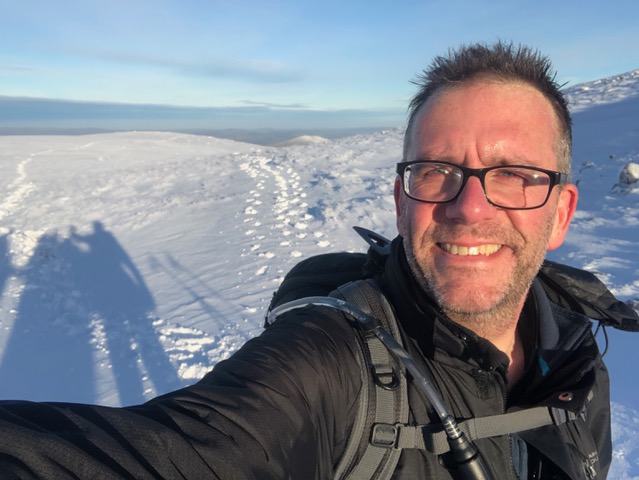 Richard Mavor, 52, who is married with four children, and lives near Skipton, scaled the Lion’s Head mountain in Cape Town, South Africa last month before descending by paraglider. During the year since his surgery he has also been skiing, winter mountaineering, climbed a number of the Munros in Scotland and completed two small triathlons.

He injured his tendon while running the Windsor half marathon in March last year – part of his training for an Ironman challenge. After running 10 miles he developed pain in his right Achilles tendon. Determined to reach the finish line, Richard managed to hobble for the last two miles by walking with his right foot turned out at a 90-degree right-angle. Two days later he suffered a ‘twang’ in the back of his Achilles and leg when his tendon severed.

“I thought I had sprained my ankle. I did not realise I had ruptured my tendon. It was very painful and the pain worsened over the next few days and I was unable to walk,” said Richard, a former RAF pilot who works for British Airways on long haul flights.

He went to see his physiotherapist who referred him to Professor Nick Harris, Consultant Orthopaedic and Trauma Surgeon at Spire Leeds Hospital with a special interest in foot and ankle disorders. Richard then researched Professor Harris who came highly recommended by patients and peers.

An MRI examination and Simmonds-Thompson Test * revealed the tendon had completely severed with a 4.5cm gap. Professor Harris suggested surgery was the best option and Richard went into Spire for the ‘open repair’ procedure with Professor Harris and his surgical team just three days later on the Easter weekend in 2018.

Surgery took around one hour and Richard was able to go home the same day wearing a plaster cast. He was advised to sit with his leg elevated and had daily injections of a blood thinner to decrease the chances of DVT.

Professor Harris said, “Richard had great difficulty walking when he came to see me. Without surgery it is likely his tendon would have healed with poor functional results preventing him from running and walking long distances.

“There remains a wide range of opinion regarding the best treatment for this condition. Historically the two commonest treatment options were conservative treatment in plaster and surgical repair. For professional sportspeople and very active otherwise healthy individuals, surgical repair is still often preferred by many. Also if the gap between the tendon ends is large (more than  1cm in neutral position ) this is associated with a poorer functional outcome with conservative treatment. With surgery the tendon ends can be accurately opposed and the period of immobilization is significantly shorter with the aim of an earlier return to sport.”

Mr Harris said, surgery involved a posterior incision being made over the ruptured Achilles tendon and the tendon ends were joined together with an absorbable suture (surgical stitches).

Recovery was no walk in the park for Richard who is used to being extremely active. The Achilles is the largest tendon in the body. It helps you to walk, run, jump and move your foot in every direction. It involved many weeks of downtime which Richard, who has always led an active lifestyle, found incredibly difficult.

“After two weeks Professor Harris replaced the plaster with one which involved a type of shoe which meant I could walk with crutches and touch my toe to the ground. This stayed in place for another two weeks and then I was given a type of boot which I wore for the next four weeks and I began a course of physiotherapy involving stretching and strengthening exercises.” 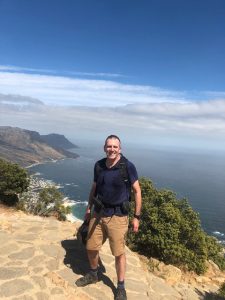 Richard gradually gained strength and began taking longer walks and doing some slow jogging. Four months after the operation he completed a 5K run and he returned to work in August 2018.

“My right ankle is not as mobile as it was, there’s still a way to go however it is improving every day,” said Richard, who can now swim, cycle and run considerable distances.

“What this injury and recovery time has taught me is that I didn’t like being indoors and being inactive for extended periods of time. The downtime made me appreciate how much I enjoy outside exercise and adventure so it’s made me determined to make the most of every free moment. It will make me take on greater challenges.”

Mr Harris said, “The future looks good for Richard now. He is back to all his sporting activities.”

Richard is now in training for his next challenge. Next month he will compete in an Ironman 70.3 in Staffordshire, which involves a 1.2 mile swim, 56 mile bike ride and a Half Marathon.

Richard said, “I am grateful to Professor Harris for helping to get me back on my feet again. I particularly liked his very direct approach. I don’t like being over-managed and he did not molly-coddle me. He explained that everybody heals differently and encouraged me to listen to my body and do what it tells me rather than following a fixed set of rules for recovery. I’m looking forward to a new set of activity challenges and I intend to really enjoy them, to focus on them and not to waste a minute of my time.”

Huddersfield man one of first to benefit from latest procedure in total ankle replacement
Sensational comeback for long distance runner after successful surgery
COVID Update
We are now able to offer face to face as well as telephone and video link consultations. All patients are provided with face masks on arrival and their temperature is taken. The clinics are being run at reduced capacity to respect social distancing. The hospital staff are being tested regularly. We are also now starting routine as well as urgent surgery. If you have any concerns or want to book an appointment, please ring my secretary on 0113 2185942
X