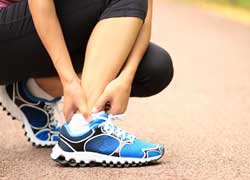 Lateral ankle sprains are one of the most common sporting injuries especially with sports such as basketball. They can result in injuries to the lateral ligaments, damage to the cartilage in the ankle joint itself (osteochondral injuries), and sometimes damage to the surrounding tendons such as the peroneal tendons. In most cases ankle sprains can be treated conservatively with a short period of immobilization in a walker boot followed by physiotherapy.

In cases where there is gross instability, osteochondral damage and tendon damage sometimes early surgery is advocated. Late complications such as impingement and instability may also warrant surgery.

The increasing use of MRI scans allows us to accurately diagnose ankle sprains and tailor treatment accordingly. Here at the A2F clinic we can access urgent MRI scans usually within 24-48 hours of a request allowing quick and definitive treatment. We offer all types of surgical treatment from ankle arthroscopy to open reconstructions and cater for all levels of athlete from Premiership footballers and rugby players to keen amateur athletes.

Treatment of ankle instability in most instances is functional and the majority of patients make an excellent recovery.

The management of chondral injuries is more difficult. Debridement, drilling and osteochondral autografts have all been described.

Ankle stabilization procedures can be broadly divided into anatomic and non-anatomic. Anatomic stabilization procedures try to repair the existing ligaments. When these are severely damaged it may be necessary to perform a non-anatomic repair using a tendon transfer. Sometimes it is possible to combine both as in the illustration. The suture repairs the existing ligaments whilst the tendon transfer re-inforces them.

Osteolysis – a complication of Total Ankle Replacement
Posterior Ankle Impingement
COVID Update
We are now able to offer face to face as well as telephone and video link consultations. All patients are provided with face masks on arrival and their temperature is taken. The clinics are being run at reduced capacity to respect social distancing. The hospital staff are being tested regularly. We are also now starting routine as well as urgent surgery. If you have any concerns or want to book an appointment, please ring my secretary on 0113 2185942
X