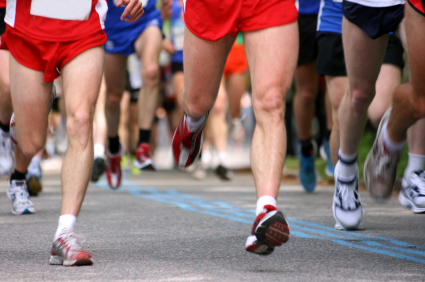 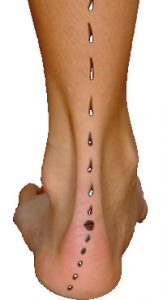 The treatment of Achilles tendonitis can be divided into operative and nonoperative. Non-operative treatment consists of rest, anti-inflammatories, orthotics and activity modification. Should symptoms persist despite this approach then surgery has been described. Surgery usually consists of resection of the inflamed peritenon together with a debridement of the degenerate tendon.

In cases of insertional Achilles tendonitis this may need to be combined with a resection of a prominent Haglund deformity (a prominence of the posterior superior aspect of the calcaneus).

Rupture of the Achilles tendon is well recognised ana usually occurs in the middle aged patient. Patients usually experience a snap or blow to the back of the leg. Most ruptures occur in the intra tendinous region. There is still a range of opinion regarding the best way of managing ruptures of the Achilles tendon. Non-operative treatment in an equinus plaster is associated with a higher rerupture rate and the tendon healing in an over lengthened position. Operative treatment allows accurate tensioning of the gastroc-soleus complex. Surgery also carries with it a lower re-rupture rate and a higher chance of returning to the level of sport at which the injury was sustained. Surgery however carries with it risks, in particular poor wound healing, infection and nerve injury.

Rheumatoid Foot
Peroneal Tendons – Tenosynovitis and subluxation
COVID Update
We are now able to offer face to face as well as telephone and video link consultations. All patients are provided with face masks on arrival and their temperature is taken. The clinics are being run at reduced capacity to respect social distancing. The hospital staff are being tested regularly. We are also now starting routine as well as urgent surgery. If you have any concerns or want to book an appointment, please ring my secretary on 0113 2185942
X