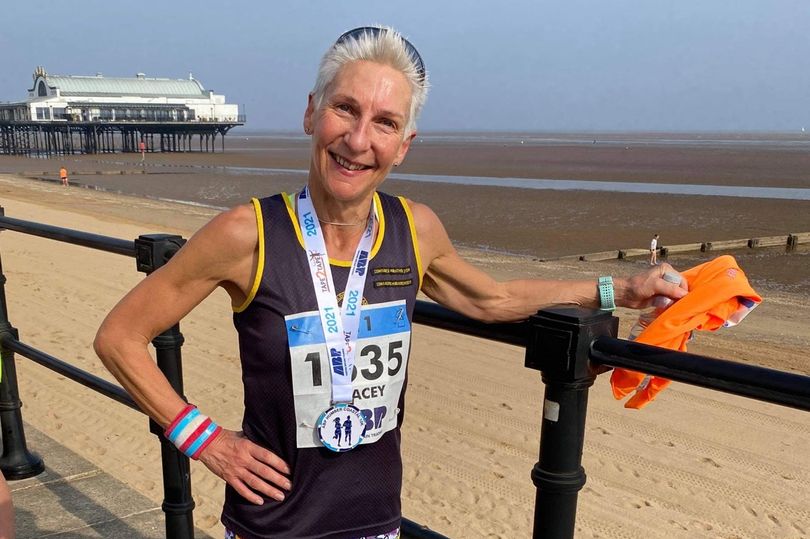 A Grimsby runner was left hobbling after a freak step left her with a painful ankle injury.

Tracey Gibson was thinking about her next competitive sporting endeavour she simply stepped off a pavement on the day of her 32nd wedding anniversary. The fluke occurence resulted in her injuring her ankle and discovering she could not lift her foot or move her toes.

Tracey, who has clocked up an impressive list of sports medals and achievements along the way, went to Spire Hull Hospital for treatment after she was left immobile and in pain.

Due to the severity of her injury, she was referred to foot and ankle specialist Professor Nick Harris, who works as a consultant foot and ankle surgeon at Spire Leeds Hospital.

“I was so surprised when I found out the extent of my injury. I thought it was just a trapped nerve,” said Tracey, 57, a bookkeeper from Grimsby.

“However, I had ruptured my (tibialis anterior) tendon and thought I might not be able to run again. There was a space at the front of my ankle where my tendon should be as the ends had sprung apart with the force of the break.”

Tracey has always led an extremely active lifestyle, having started running 20 years ago.

She’s been in the top 20 per cent nationally of her age groups and has twice won the 10-mile British Masters title, as well as competing extensively abroad, running marathons such as Boston USA.

After venturing into ultra-running, Tracey ran the world-famous Comrades Marathon (around 90km) in South Africa in 2014 and 2015, earning a “back-to-back” medal, as well as running in the British 50km championships and finishing third female at the age of 50.

She has also taken part in several World and European Master’s Athletics championships in such diverse places as South Korea, Brazil, Australia and Finland, winning a silver medal in the half marathon in South Korea and various team medals especially in cross country.

Now Tracey has returned to competitive running and continues to clock up the wins – also achieving a new personal best time in her age category.

Tracey, who is married to Darren and has two grown-up children said, “I had researched Professor Harris and knew I was in the best hands. He told me he could fix it and get me back to my life.

“Running and competing is so important for me and I want to ensure I have the best quality of life. I didn’t want to be limited in my physical ability and I didn’t want to wait for surgery.

Professor Harris said Tracey’s injury is extremely rare and she underwent complicated surgery lasting two hours. “Tracey had suffered a ruptured tendon and the ends had retracted, causing drop foot – an inability to lift her foot.

“In ‘low demand’ patients the rupture can sometimes be treated conservatively with a splint, but in active patients, such as Tracey, surgery gives the best chance of more normal function.

“The ends had retracted far apart and had frayed so a reconstruction was needed using a tendon graft. This involved a transfer of the tendon which lifts the big toe. We also transferred the tendon which lifts the 2 nd toe and attached it to the big toe also – this part of the procedure has not been done before. If she had not had the surgery, it’s unlikely Tracey would have been able to return to sport and running.”

Following an overnight stay, Tracey was able to go home. Initially she wore a plaster cast up to the knee for three weeks which was replaced by a special boot. She kept her foot elevated and was able to work from home.

The boot was removed at the end of February and a physiotherapy regime started at Spire in March. Integral to her rehabilitation, she also had access to the AlterG anti-gravity treadmill at Spire Leeds Hospital.*

She said, “The AlterG is phenomenal. It allowed me to run without bearing weight. It was important for me to keep up my fitness and do strength training. By April I was able to run outside, building up gradually. I obeyed Professor Harris’s instructions to the letter.

I regained fitness fairly quickly although I was not able to drive for six months until I could demonstrate that I could do an emergency stop.”

Professor Harris said the results are excellent. “The future looks good for Tracey and she should not experience any long-term issues now.”

In May she completed a couch to 5k run/walk programme. “I was amazed and delighted I could do it, but Prof. Harris told me he would get me back running again.”

Tracey has gone from strength to strength. This year she completed a virtual 10k, part of the Comrades Marathon finishing 2 nd in the women’s category worldwide. More races followed and by mid-September this year she achieved her fastest time (women’s) in her age group during the Cleethorpes Coastal 10k.

“It’s like a miracle. The comeback is amazing. Both my endurance and speed have returned. It’s beyond my wildest dreams. I would like to say a massive thanks to Professor Harris and his team at Spire Leeds Hospital. Everyone was so professional and they put me at ease straight away.”

Tracey is now planning to compete in the World Masters Athletics Championships in Finland next year as well as a series of cross country and road races in the UK.

She adds, “I’ve got a couple of local races planned in the interim however my main plan is to keep strong and injury-free!”

Reaching the Summit After Total Ankle Replacement Surgery
A New Year, A New Ankle and New Lease of Life
COVID Update
We are now able to offer face to face as well as telephone and video link consultations. All patients are provided with face masks on arrival and their temperature is taken. The clinics are being run at reduced capacity to respect social distancing. The hospital staff are being tested regularly. We are also now starting routine as well as urgent surgery. If you have any concerns or want to book an appointment, please ring my secretary on 0113 2185942
X